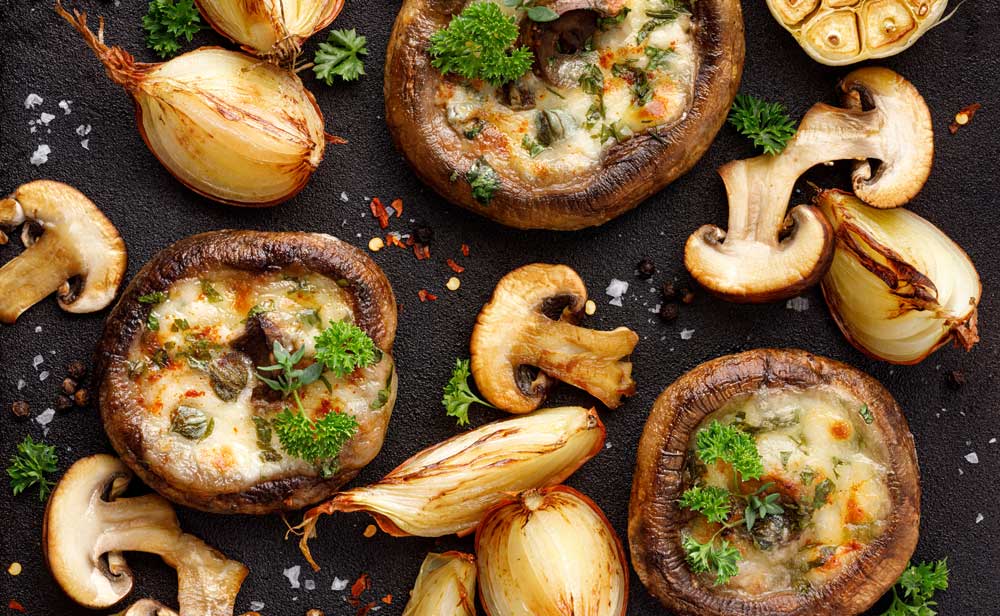 In addition, they are a food that contains vitamin D, which can also help in prevention.

Several studies claim that people who consume a lot of fibre may have a lower risk of developing type 2 diabetes. And it can also help those who already have it by reducing blood glucose levels.

A cup of sliced ​​raw mushrooms, weighing 70 gr. Provides almost 1 gram of fibre. And the Dietary Guidelines recommend that adults consume between 22.4 and 33.6 grams of dietary fibre each day, depending on gender and age.
Heart health

The fibre, potassium, and vitamin C in mushrooms can contribute to cardiovascular health.

Potassium can help regulate blood pressure, which can reduce hypertension and cardiovascular disease.

And since the American Heart Association (AHA) recommends reducing the intake of added salt in the diet and eating more foods that contain potassium, it will be good to know that mushrooms appear on the list of foods that provide potassium.

In addition, many mushrooms have a type of fibre called beta-glucans that can lower blood cholesterol levels in their cell walls.
In pregnancy

Many women take folic acid or folate supplements during pregnancy to improve fetal health, but mushrooms can also provide folate.

One cup of whole, raw mushrooms contains 16.3 micrograms of folate.
For vegans

Mushrooms are also the only non-fortified, vegan dietary source of vitamin D, which occurs naturally in very few foods.

Their effectiveness increases significantly when exposed to ultraviolet light (or sunlight) before eating them.

Also, other minerals that can be difficult to obtain in a vegan diet, such as selenium, potassium, copper, iron and phosphorus, are available in mushrooms.
Other benefits

Mushrooms are rich in B vitamins, so they help the body obtain energy and form red blood cells. Even some type of vitamin B is also important for maintaining a healthy brain.

Additionally, choline, an essential nutrient for humans and found in mushrooms, can help with muscle movement, learning, and memory. Because it helps maintain the structure of cell membranes and plays a role in the transmission of nerve impulses.
Do you know what Umami is?

In the early 20th century, a Japanese researcher discovered that traditional Japanese soup did not taste salty, sweet, bitter, or sour. It had a different flavour.

So he decided he was looking at a new flavour: the fifth of the basics, sweet, sour, bitter, and salty.

Its peculiarity is that it causes salivary secretion, does not satiate and even whets the appetite.

And just as sweet is noted at local points on the tip of the tongue and bitter at the back, umami-sensitive taste buds are believed to be present on more than half of the tongue.

Mushrooms are considered one of the star products in which we can notice Umami, along with Parmesan cheese, asparagus, tomatoes, meat, anchovies, soy sauce or ham.

This flavour is, in general, responsible for enhancing the pleasant taste of a large number of foods.
Autumn is synonymous with getting lost in the forests and mountains, collecting mushrooms whenever we know, and preparing our dishes healthily and naturally.

According to some research, around 2,000 mushrooms are considered edible, of which about 20 are cultivated commercially.

But did you know that mushrooms have many beneficial health properties?

Mushrooms are fat-free and contain a moderate amount of carbohydrates, and are a source of fibre. Due to their nutritional properties, they are indicated in diets to lose weight. They contain vitamins B2, B3, and D2 and minerals, such as potassium, phosphorus, iodine, and calcium.

Mushrooms strengthen the immune system and defences. In addition, its iodine content benefits the thyroid.

Apart from all the potential of the mushrooms, they are delicious! We will tell you some recipes that you can make.
Níscalos with garlic
Ingredients:

The chanterelle is the most widely consumed wild mushroom. To prepare the chanterelles, we first clean them very well. Then, we heat four or five tablespoons of oil in a pan olive and add the sliced ​​garlic and chilli. Once golden brown, add the chanterelles to the pan, stir for a minute.

Fry the mushrooms in a frying pan with a little oil and ahead of onion and garlic over low heat.

While they are frying, we beat the eggs. Once the mushrooms are fried, we add the mushrooms to the eggs, mix and return to the pan, putting this previously with a little virgin olive oil. We make the omelette by mixing everything in the same pan while it cooks over low heat.
Risotto with mushrooms
Ingredients:

This dish is a perfect ally for a single-dish meal. To start, we wash the rice and reserve. Then we peel and chop the onion and garlic cloves, chop the mushrooms and put the broth to heat.

Sauté the onion and garlic. Next, add the mushrooms, add salt and pepper to taste, fry again and add the rice, constantly stirring, for one or two minutes. Add the wine, the parsley and the broth little by little. This process usually takes twenty minutes.

Finally, add the grated cheese, stir and let it rest for two minutes. It will be delicious!

Enjoy this fall with mushroom recipes. Either because you are looking for them in the field or buying them in the market, they are a delicious dish, as a main or side.