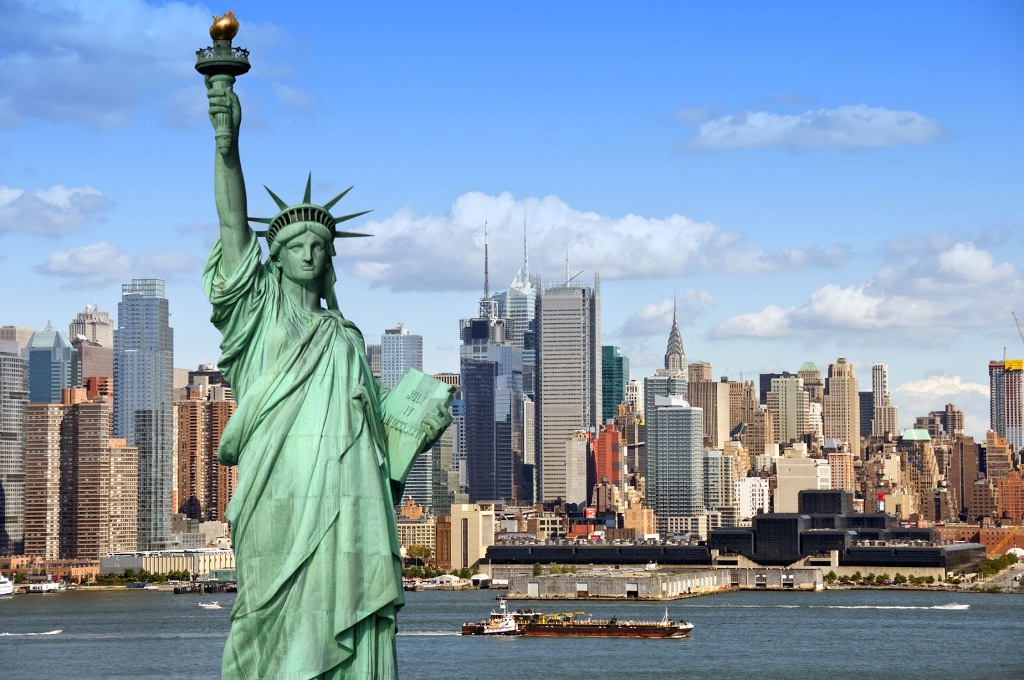 You already saw america in photos, now visit them in real life.

Some images form a version of the United States that has long remained in the collective imagination worldwide. Even if you have seen these places infinite times through a screen and in photographs, it is unique to visit them in person. From Chicago’s famous Cloud Gate sculpture to the futuristic Gateway Arch in St. Louis, America is filled with iconic photo opportunities that allow you to say, “I was there proudly.” So get out your to-do list before you die and prepare your selfie stick; the iconic United States is waiting for you.
Clouds frame the Statue of Liberty in New York City

You can see many of the must-see sites in one trip to New York City.

Start in downtown New York City for a stroll to the Statue of Liberty, the massive sculpture that welcomes immigrants and visitors alike to the shores of Manhattan. The iconic statue stands 93 meters tall and is as impressive as it sounds. After seeing her, head to Wall Street in midtown Manhattan to take a photo with the statue of the Charging Bull (and her new company, Fearless Girl), near the New York Stock Exchange (NYSE)). When you go uptown, you’ll find the classic Flatiron Building before you begin your journey into the glittering hustle and bustle of Times Square. Central Park is as iconic as the famous Metro system. And don’t forget the Brooklyn Bridge, the Natural History Museum, and quintessential neighbourhoods like Greenwich Village, DUMBO, and Chinatown. To complete your classic circuit, you have to go for a bagel, a slice of pizza and a T-shirt that says “I Heart NY.”
The Lincoln Memorial in fall, on the National Mall in Washington, D.C.

Visit the National Mall and walk along the vast expanse of lawns, home to many American monuments. A tour of the area will take you to The White House, the home of the President of the United States, monuments honouring former Presidents George Washington and Abraham Lincoln, and American heroes such as Dr. Martin Luther King. Jr., and veterans of World War II, the Vietnam War, and the Korean War. While you’re there, you’ll have free access to more than a dozen of America’s most iconic museums, including the National Gallery of Art, the National Air & Space Museum, and the United States Holocaust Memorial Museum.
Hollywood sign in the Hollywood Hills, California

On the West Coast, and located on Mount Lee in the Hollywood Hills, are the iconic 14-meter-high white letters that spell “Hollywood” and can be seen close or far.

You can also see famous stars from the Hollywood Walk of Fame on Hollywood Boulevard in the area. When in Los Angeles, head to Venice Beach for another classic American experience: a stroll along the Venice Beach Boardwalk. You will find many colourful characters and equally colourful art designs that are probably more suitable to observe than buy. Next, head to the famous Santa Monica Pier to see the sign marking the end of Route 66.

Beautiful, vibrant, laid-back, and fun are some of the defining adjectives of New Orleans, southeastern Louisiana.

It is a city with French and Spanish heritage with African-American features, which expresses American multiculturalism in architecture, music and gastronomy.

New Orleans is a beautiful American rarity since President Thomas Jefferson bought it from Napoleon Bonaparte for $ 15 million.

To immerse yourself in its French Quarter is to go back to the 18th century while enjoying the cultural distinctions added throughout the 19th and 20th centuries, making this city the most eclectic.

Behind the industrial and somewhat neglected Memphis, there are accurate material and spiritual gems, which exalt the iconic city of Elvis Presley.

Memphis is the most influential music plaza in the United States, like Johnny Cash, the King of country, B.B. King, the King of blues and of course, the King of rock and roll, Elvis Presley.

While it would be silly not to visit Graceland, Elvis’s presidential mansion, and the iconic Beale Street club, where B. B. King played his guitar; Memphis is not all about music.

The National Museum of Civil Rights was built in the motel where Martin Luther King Jr, leader of the civil movement for African Americans, was assassinated. It showcases the long struggles of Americans of colour to win their civil rights.